An author, advocate, and life long learner, Robin Stevens Payes is interested in educating teens and young adults about science and the arts in a way that is exciting and relevant to them. We sat down with her to learn about her journey, the projects she's working on, and the vision that she has for STEAM education for the next generation of young scientists.

Have you always been passionate about science? What sparked your interest?

I have always been fascinated by science, especially astronomy, but as I got into high school, there was too much math for me to want to pursue it. I was inspired by the space launches when I was growing up—I had always been a stargazer, even as a little girl—and the idea that humans could somehow engineer a giant rocket to launch us into space, and to see that amazing view of Earth from beyond it showed me how powerful learning science could be outside the classroom.

How did that translate into college and career?

When I was in high school chemistry, I got completely turned off by the way we were taught. There was no context. Like, why was chemistry even important to my everyday life? Help me figure that out, and I might care more to learn the math. As it was, I needed a tutor to help me pass chemistry, but what my tutor really wanted most was to teach me how to use a slide rule (and we all know how useful that is today!). Famous scientists, like Marie Curie, inspired me more because I was interested in the person behind the science, even while I was having a difficult time with the hard science. Her whole story was more captivating to me than learning about the periodic table, but it also inspired me to learn the periodic table. I was interested in scientific discoveries and the people behind the discoveries.

So instead, once I went to college, I became a French major. I loved languages, and they came easy to me. I also had this love of acting, so I minored in Drama, and starred in French plays, in French. I stayed as far from the sciences as I could—fulfilling my science requirements with biology and a course called Baby Physics. The thing I remember most about that was making pinhole cameras, which led me to learn that it was an ancient technology—artists like Vermeer and Leonardo da Vinci famously painted many of their portraits using that technology. So, in a way, art and science have always been two sides of the same coin to me.

Now, many years later, as I continue working with women in science and tech, I see how far we’ve come to get women into these fields, and how far we have left to go.

Let's talk a little bit about this terrific book series you're working on, The Edge of Yesterday. You gave me a great background when we last spoke about how you created the Edge of Yesterday world. Can you re-tell that story for me?

I have three kids. Like every mom I know, I was a soccer mom (or, more accurately, a soccer, tennis, lacrosse, band, golf, theatre . . . mom) When my kids were in their pre-teens and early teens, I would listen in on their conversations in the carpool with their friends about what they wanted to do when they grew up. What struck me was that they all had great ambitions—they wanted to be everything! Star soccer players and diplomats who play the saxophone and guitar, go into medicine and bioengineering, social work, and physical therapy.

It occurred to me that, in our society, we force kids to choose very early on what they will specialize in (like learning how to play the French horn at 5 because it’s an instrument few kids take up, and that will get you into Harvard). Our drive to specialize keeps them from exploring what they love, finding what they’re passionate about. In trying to ensure their success, we may actually keep them from trying to bring their gifts—all of them—into the world.

So, I began a thought experiment: who, in history, was able to do it all? The obvious answer was Leonardo da Vinci. But if a Leonardo was born today, would he have been able to accomplish everything he did? He was a brilliant artist, of course, but he was also an inventor, an engineer, a musician, an impresario, a biologist, a chef, and cartographer….  More than mere curiosity, he showed visionary ways to apply that to design and invention. He compulsively made designs and sketches, and notes about everything from flying machines to a military tank, from movable bridges, to mapmaking, and even designed a modern bicycle. Of the 100 patents that went into the GM motor, 99 of them were Leonardo’s designs. He dreamed our modern world into being—500 years ago!

So, I decided to try to write a story to see whether that level of mastery might be possible to someone growing up today. I had the idea to write about a modern girl who learns all of Leonardo’s secrets because she wants to be like him. Charley (the young inventor who travels back in time to meet Leonardo in The Edge of Yesterday) introduced herself to me as I was writing; she’s a spunky girl with the mindset that she can do it all. I started writing the idea as a screenplay, because the adventure presented itself so cinematically. I had to put the screenplay away for 12 years before the iPad and the Higgs Boson made Charley’s dreams of time travel scientifically and technologically plausible.

What kinds of initiatives are you pairing with your writing to support girls in STEM?

I have built out an interactive learning platform that’s based on the story (it's not required to read the book but it is more meaningful). The web site tells the story in a different way that’s designed for teens to engage with Learning like Leonardo, which means learning through curiosity, discovery, exploration, and play. There’s another section, Make the Story Yours, that I hope will evolve into a publishing platform for teens’ original creative works. I think it's important to engage with teens where they are and help them. And we’re developing out a section about the Renaissance, and eventually, all the other times and places to which Charley time travels, where teens can Discover New Worlds.

We approach this “learning through story” framework in a way that incorporates Math, Art, Science, Technology, Engineering, and Reflection, all through the “Yarns” of storytelling. It’s a more well-rounded approach to learning—something that, in education, is known as Whole Child learning—to inspire young people to connect learning to the everyday, and to their own passions and dreams. The more kids can see the interconnections between subject areas and how they apply to the everyday, and the more excited they’ll be to explore those interconnections and make their own.

I’ve heard it projected that a child entering kindergarten today will have as many as 10 jobs in their lifetime, five of which haven’t been invented yet! So, young people must learn how to learn for life, to be resilient, and to persist in solving some seemingly intractable problems.

What is an important educational element that exists to support girls' passion for STEM?

I’m involved with Women in Technology’s (WIT) Girls in Technology (GIT) programs. What’s really wonderful about GIT is that there are avenues for any girl who’s interested to learn about—and even meet and talk to—amazing women who are doing great work in STEM right now. GIT has a program that pairs teenage girls with mentors to help guide them in choosing a direction in STEM, and understanding what it takes to pursue that avenue. Another great GIT initiative is the CyberPatriot Girls program, where girls form teams to take on a coding challenge - usually a cyber security coding project - and compete locally, statewide and nationally. The idea is to have all-girl teams competing, showing girls they can compete, build confidence and skills, and excel in what today, unfortunately, remains a male-dominated field.

Who is your woman-in-STEM icon? Why?

Emilie du Châtelet, an 18th century French noblewoman who grew up with two brothers and was a lot smarter than both of them—or most anybody else in her day. Her father believed in her and educated her. When Louis XIV died, her father lost his position at Court, and couldn’t afford tutors for her anymore. To earn money for books and tutors, she went to Versailles to duel and gamble—and win, so she could fund her studies. She translated Newton's Principia into French in an edition that’s still used today. Emilie was a physicist and brilliant mathematician. Her own research laid the foundation for the Theory of Relativity. She was a philosopher who contributed to Diderot’s Encyclopedie. She was also a consort of Voltaire and, together, they wrote, studied and hosted amazing discussions with many of the great lights of Enlightenment Europe.

Oh, and she was a mother of four children. Unfortunately, she died in childbirth at 43—or think what more the beautiful Emilie might have accomplished!

If you could only give one piece of advice to a girl who loves science, what would it be?

Remain open. Pursue what you love and what you're interested in, but also expose yourself to lots of different ideas and subjects. Talk to people who are doing interesting things in the fields that they love. The pace of innovation is so quick that we don’t know what the needs of tomorrow are going to be. We do know that we’ll need a lot of big ideas to handle big problems. The flooding in Houston, and the devastation in Puerto Rico are just early indications of what climate change could bring. We’ll need teams of smart men and women figuring this out together.

Think about the world outside of your house or even a continent away and think about how what you do can affect people across the world. Connect with people who have similar dreams and passions, and explore what it takes to bring those into the world. Be curious. Dream big.

Edge of Yesterday is available on Amazon and Barnes and Noble, or find it on Goodreads. 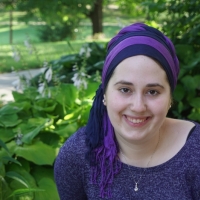